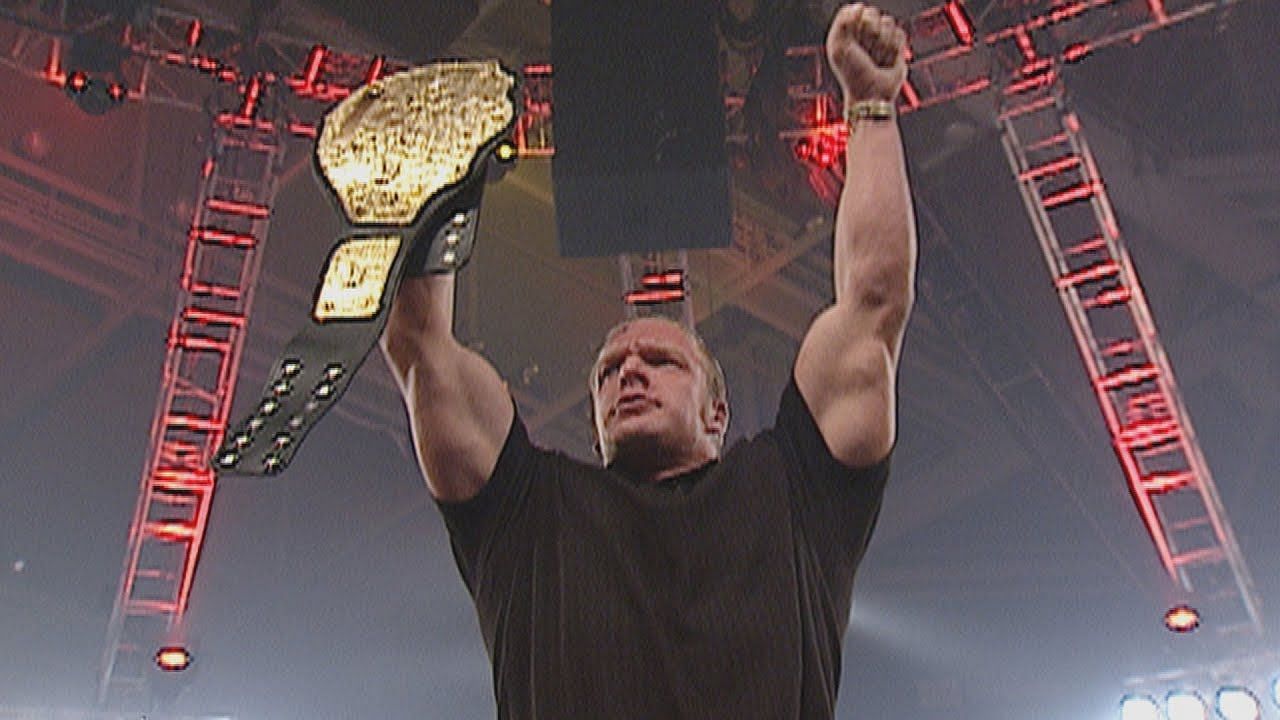 Winning a WWE Championship can be the culmination of some serious hard work for a superstar. The moment they have their arm raised after a match and the title is handed to them can be one of the most satisfying of their careers.

Over the years, though, there have been a number of stars in the company who have won titles without actually having to wrestle for them, whether due to a new belt being created or a champion being forced to relinquish their own championship.

On that note, here are four WWE Superstars who won championships without wrestling.

#4. Asuka was given the Raw Women’s Championship after Becky Lynch announced her pregnancy

The most recent example of a superstar being given a championship without wrestling for it was Asuka on the Raw after Money in the Bank in 2020.

The Empress of Tomorrow had won the event’s marquee match the night before, securing the briefcase that gave her a title match whenever she wanted.

However, the reigning Raw Women’s Champion Becky Lynch announced the very next night that she was pregnant and would be vacating her title.

Instead of creating a match for the vacant championship, Asuka was simply handed the title after it was revealed to have been inside the briefcase she’d won the night before.

#3. Ted Dibiase bought the WWF Championship from Andre the Giant

Feb 5, 1988: @HulkHogan lost his title to Andre the Giant after Ted DiBiase paid off the ref on Friday Night’s Main Event. #80s Andre then surrendered the belt to the Million Dollar Man (but eventually led to the title being vacated).

Feb 5, 1988: @HulkHogan lost his title to Andre the Giant after Ted DiBiase paid off the ref on Friday Night’s Main Event. #80s Andre then surrendered the belt to the Million Dollar Man (but eventually led to the title being vacated). https://t.co/tR8auCU8Yy

True to his character, Ted Dibiase used his money to get his hands on the WWF Championship when he paid Andre the Giant to surrender the title to him.

Andre had just won the belt from Hulk Hogan when referee Dave Hebner counted the pin despite the Hulkster’s shoulder being up before three. This all led to the “Evil Hebner” storyline, with it being revealed that Dave’s brother Earl was actually the one officiating the match. But that’s a whole other story.

Andre immediately sold the title to The Million Dollar Man, and for three house shows, Dibiase was billed as the WWF Champion and defended the belt against Bam Bam Bigelow.

Not long after, WWF President Jack Tunney declared that Dibiase wasn’t the champion and the reign was invalid. The title was soon taken from him and a tournament was held at WrestleMania IV to crown a new champion.

When WWE decided to relaunch the ECW brand, the company needed a headliner for the show.

They wanted someone to lead the way and be the face of the brand as its champion, but instead of holding a tournament to crown one, they simply handed the title to Rob Van Dam.

RVD, who had recently won the WWE Championship from John Cena at ECW One Night Stand, was a fitting first champion for ECW’s revival. Seeing him hold both the WWE and ECW titles was satisfying for fans.

It was disappointing, though, that the brand didn’t give anyone on the roster a chance to wrestle for the belt at first and that Paul Heyman was just handing it to Van Dam like some sort of prop.

#1. Triple H was given the new World Heavyweight Championship by Eric Bischoff

As a result, Eric Bischoff decided to bring back the famous “Big Gold Belt” that was used in WCW and NWA to represent their world titles. Thus the World Heavyweight Championship was revived in WWE.

However, instead of forcing Raw’s top stars to face off over the prestigious new championship, Bischoff simply handed it to Triple H. The Cerebral Assassin was one of the biggest superstars in the company at the time, and it made perfect sense for him to lead the Raw brand.

With that being said, seeing him handed the title left a sour taste in fans’ mouths, and it was the launching pad for what became the Game’s “Reign of Terror”.

An ex WWE head writer speaks up about Sasha Banks and Naomi walking out of WWE. More details here..

Denial of responsibility! Verve Times is an automatic aggregator of the all world’s media. In each content, the hyperlink to the primary source is specified. All trademarks belong to their rightful owners, all materials to their authors. If you are the owner of the content and do not want us to publish your materials, please contact us by email – [email protected]. The content will be deleted within 24 hours.
AsukaHistory of WWEListicleTriple HWWEWWE ChampionshipWWE Roster
0
Share FacebookTwitterGoogle+ReddItWhatsAppPinterestEmail