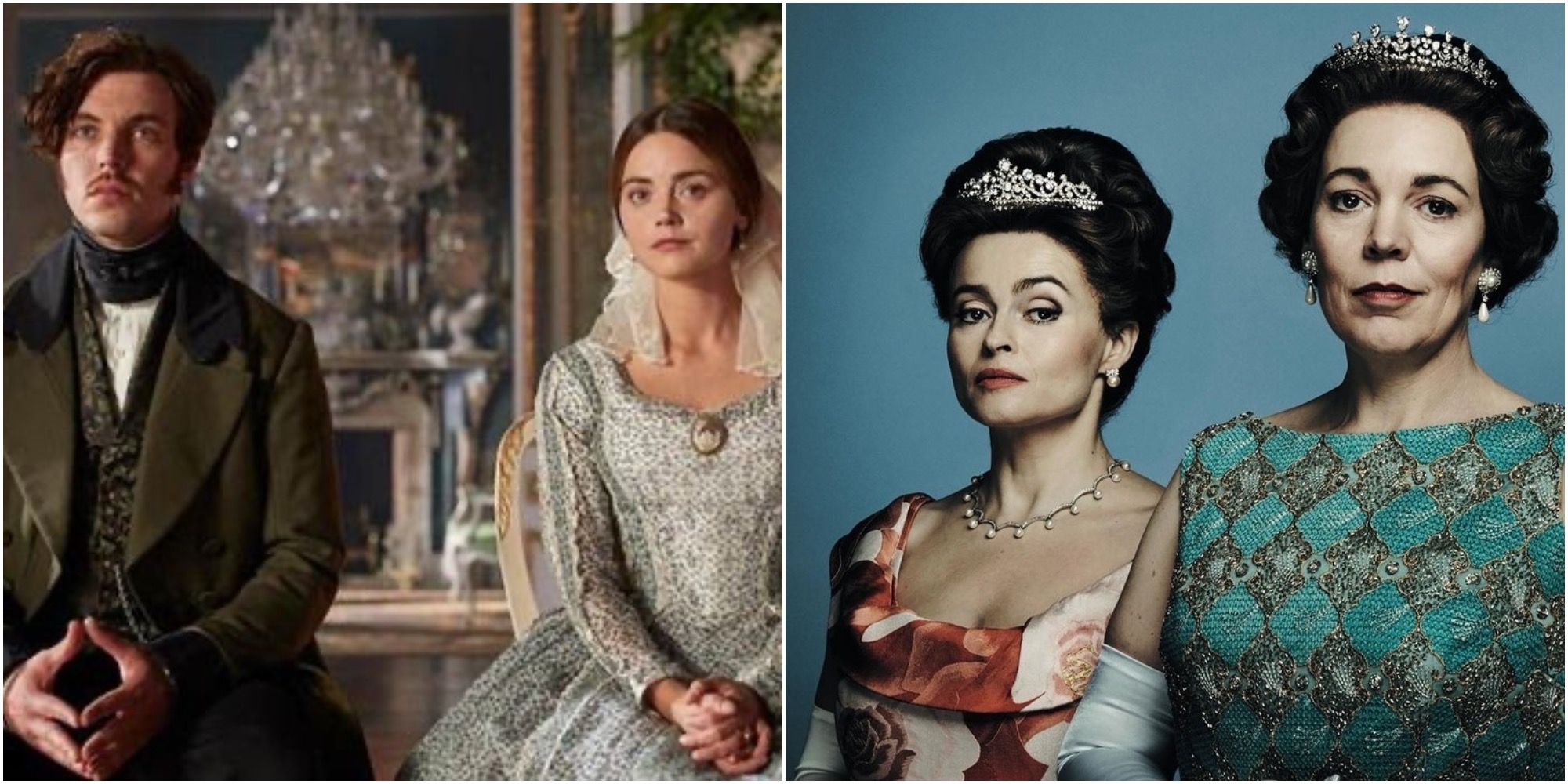 10 TV Shows About Life As Royalty

British television series of all genres are enjoyed by viewers across the world. Although, shows detailing the private lives of the British monarchy often attract a curious audience. This interest has resulted in the development of shows about not only the British monarchy, but monarchies worldwide.

It is uncertain to what extent these television shows portray the true identities of past and present royals. However, one thing you can count on is that the public enjoys an inside look of typically private people. Or maybe it’s just because everyone wants to be treated like royalty sometimes.

The historical drama series The Crown took Netflix by storm by portraying the reign of Queen Elizabeth II. The Crown has one of the heftiest price tags of production costs, but certainly rakes in the viewers and a whopping 63 Primetime Emmy nominations, winning 21 of them.

RELATED: 10 Perfect TV Shows To Watch On Netflix This November

The Crown depicts the life of Queen Elizabeth II from the time she ascends the throne and marries Prince Philip, to the introduction of the kind-hearted Princess Diana. Fans of The Crown are eager to see more of the people’s princess when season 5 premieres in November 2022.

Wolf Hall is a six-episode miniseries that premiered on BBC 2 in January 2015 and later on PBS. The show is heavily fictionalized, but is based on two novels by Hilary Mantel: Wolf Hall and Bring Up The Bodies. Wolf Hall illustrates the life of Thomas Cromwell, a minister to King Henry VIII during the 1520s, and displays how King Henry VIII is struggling to produce a son with his wife, Anne Boleyn.

Boleyn is played by Claire Foy, who previously played the role of young Queen Elizabeth II in The Crown. King Henry VIII is seeking a divorce from Boleyn, much to most of Europe’s disapproval, but Cromwell assists the King. Wolf Hall received eight Primetime Emmy nominations and won a Golden Globe for Best Miniseries or Television Film.

The Spanish Princess is a 2019 historical drama series produced by Starz. The life of the first wife of King Henry VIII, Catherine of Aragon, is portrayed throughout The Spanish Princess. Catherine is the teenaged daughter of Queen Isabella and King Ferdinand II and is forced to travel to England from Spain to marry Arthur, Prince of Wales.

Arthur had been betrothed to Catherine since he was 11-years-old because of an alliance formed by his father, King Henry VII. Arthur dies of the sweating sickness and Catherine is demanded to marry King Henry VIII. Charlotte Hope, who is known for her role as Myranda in Game of Thrones, portrays Catherine in her tumultuous marriage to King Henry VIII, played by Ruairi O’Connor.

7 Victoria Left Viewers With Quite The Cliffhanger

Victoria was written by Daisy Goodwin and stars Doctor Who actress Jenna Coleman in her role as Queen Victoria. Victoria begins with Victoria’s unlikely ascension to the throne in 1837 and her love-filled marriage to Prince Albert of Germany. Albert is portrayed by Tom Hughes.

As Victoria continues, viewers are able to see Victoria grow older and how her headstrong attitude gets her in trouble. After giving birth to a litter of children, the third season ended in 2019 on a huge cliffhanger that left fans wanting more. Unfortunately, there are no plans to create a fourth season for Victoria.

Versailles went a different direction and focuses on royals in the French monarchy rather than the British monarchy. Versailles follows the life of the sun king, King Louis XIV, and his reign during the construction of the Palace of Versailles.

Versailles earned good reviews initially and was even renewed for a second season prior to the first season being released. However, the number of viewers tuning in quickly declined, and the series was canceled after its third season.

The Tudors was produced for Showtime and aired in 2007. The Tudors is set in 16th-century England and depicts the life and reign of King Henry VIII. Throughout the series, viewers watch how each of his six marriages unfolds. The fourth and final season of The Tudors offers viewers an inside look into the final two marriages of King Henry VIII. His marriages to Catherine Howard and Catherine Parr are full of problems, so much so that the King orders the beheading of Howard. King Henry VIII later succumbs to illness and leaves the throne to Parr.

Three female protagonists who are based on actual historical figures during the Wars of the Roses star in The White Queen. The characters are Elizabeth Woodville, Margaret Beaufort, and Anne Neville. Although, there is a larger emphasis on Woodville’s character in the show. Woodville would later marry King Edward IV of England and the story continues in The White Princess.

The Last Czars is a short six-episode miniseries that premiered on Netflix in July 2019. The Last Czars focuses on the life and reign of Czar Nicholas II from the time he ascends the throne in 1894 until his assassination in 1918. Russia greatly disapproved of the Czar’s viewpoints and this caused him to abdicate the throne in 1917 prior to his death.

The Bolshevik Revolution led to the royal family being exiled in Siberia and later executed. At the time of his death, Czar Nicholas II was the last emperor of the Romanov Dynasty. The Last Czars is celebrated as being a historically accurate representation of events.

2 The Story Continues In The White Princess

The White Princess miniseries was released in 2017 and serves as the sequel to The White Queen. The White Princess portrays the life of Elizabeth of York, known as ‘Lizzie,’ who is the daughter of Elizabeth Woodville, the white queen. Lizzie manages to end the War of the Roses through her marriage to Henry VII and forming an alliance between the House of Lancaster and the House of York.

If Lizzie and her husband thought their problems were over, think not. Lizzie and Henry have to form more alliances than just between two English houses. The two monarchs need to develop a rapport with Queen Isabella and King Ferdinand II of Spain. Find out if this works in the sequel: The Spanish Princess.

1 Reign Is A More About The Drama Than Historical Accuracy

If one wants a historically accurate show depicting the lives of royals, Reign just isn’t the show for that. Reign first premiered on The CW in 2013 and follows the drama-filled life of Mary, Queen of Scots. Mary ascended to the throne at just six days old after her father, King James V of Scotland, died in 1542. The series documents Mary’s tumultuous relationships and her various political troubles.

Reign released its fourth and final season in 2017 after praises of acting performances and elaborate costumes. However, the ridiculousness of the storylines just wasn’t believable enough so the series earned mixed reviews.

NEXT: 10 Anime You Didn’t Know Had TV Dramas


Next
Marvel: 10 Animated Parental Figures, Ranked From Worst To Best

Cassidy Stephenson is a reader, writer, and video game enthusiast based outside of Nashville, TN. She is a recent graduate of Concordia University Chicago and served as the co-editor-in-chief for her campus newspaper. She now works as a Gaming Lists writer for Comic Book Resources. In her free time, she loves watching anime, listening to music, and pulling 5-stars on Genshin Impact. Follow her on Twitter for more shenanigans Cassidy_Lee18..

Are Star Wars’ Rancors More Than Just a Scary Face?

Solana price: Down 67% from high! Are golden days of this…

No Biden reboot coming from president who thinks he’s…