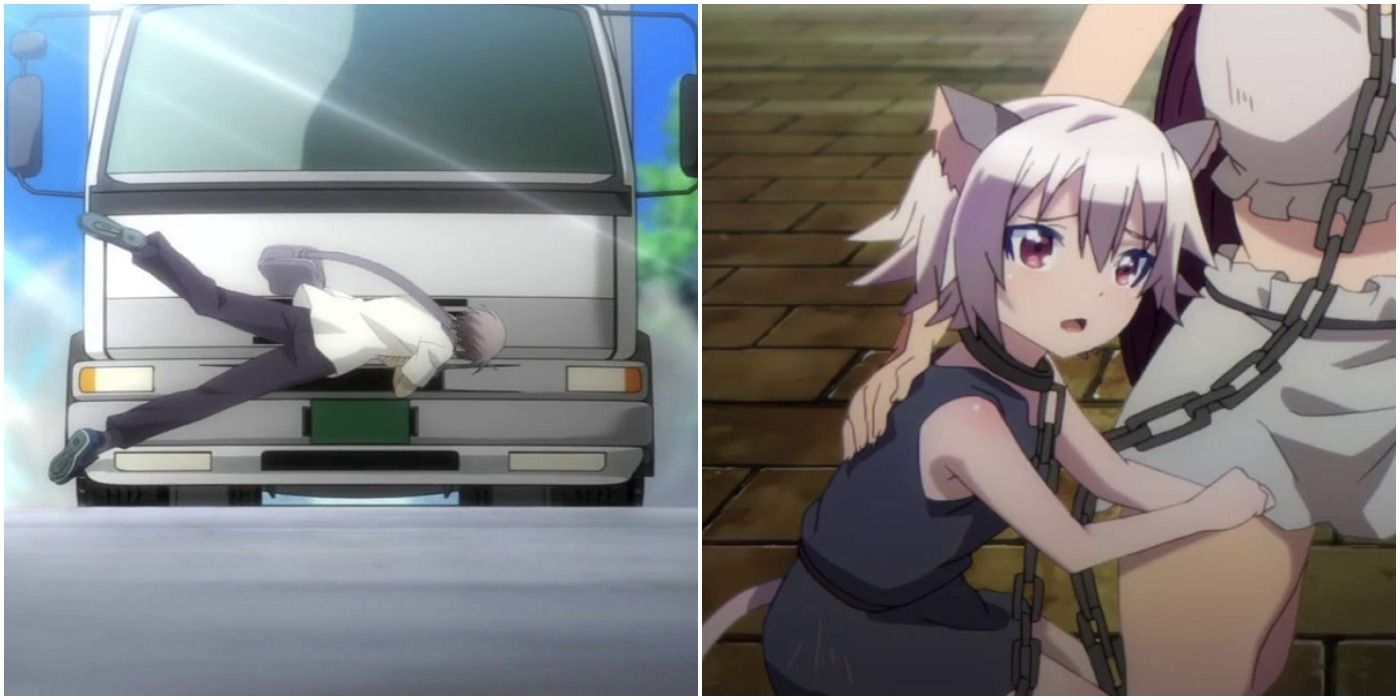 10 Odd Things About The Isekai Genre Everyone Ignores

The isekai genre of anime has absolutely boomed in popularity, and it isn’t hard to see why. Anime itself can be used as a thrilling form of escape from fans’ daily lives, allowing them to become completely enthralled in gorgeous, well thought-out worlds that get them thinking and spark their creativity. Isekai series take this to an entirely different level, as even the main characters within those shows are escaping their ‘boring’ relatable lives to typically live out their dreams or power fantasies in a much more interesting fantasy universe.

However, not everything about the genre is a magical step above everyday life. In fact, there are many tropes that a majority of isekai series tend to incorporate that come off as quite strange, and it doesn’t feel like fans ever tend to bat an eye when they otherwise should.

Mature jokes being played off in the name of humor isn’t anything new in the world of anime, but the isekai genre can blur some rather questionable boundaries in this department. It feels as if no female character is safe from being subjected to this form of humor, even if they’re at an age where they really shouldn’t.

One of the biggest offenders of this has to be how Kazuma treats Megumin from Konosuba. Scenes involving the two taking a bath together or the protagonist using a steal skill to gain access to her undergarments are played off as humorous but can feel downright disgusting to watch.

The trope of a main character – typically male, and more often than not a rather average one at that – getting a “harem” of sorts is nothing new. Watching a large group of girls all flirt with and fight for the affections of the same protagonist may be a power fantasy, but it’s a boringly overused one.

Not only that, but this can even apply to characters who are in relationships in-canon, as is the case with Kirito from Sword Art Online. It can get infuriating watching a handful of other girls flirt with or allude to having feelings for him when his canon girlfriend Asuna is typically right there with them.

Before being reincarnated or sent to a different universe entirely, isekai protagonists are often some of the most hopeless characters out there. Whether it’s being a shut-in NEET who doesn’t have the skills necessary to talk to people or being stuck in a job that they find far too monotonous, they’re often unable to make positive changes in their normal lives.

However, after being transported, they tend to become the main source of hope for most other characters within the series. This is true even for characters who don’t get a significant power upgrade in their new life, which begs the question of just why it was so difficult for them to do so beforehand.

7 In Some Worlds, It Feels As If No One Possesses Power Except For The Main Lead

The isekai genre is more-or-less built around power fantasies, aside from those that take a more comedic approach to things. Given this, it makes sense that the protagonist fans spend the series following would also be the most powerful character in-universe.

However, it comes off as strange that many of these universes feel like they don’t have anyone of noteworthy power until the protagonist arrives. This is especially true in universes that have incredibly powerful tyrant kings or mass hoards of dangerous monsters roaming around.

6 For A Genre About Out-There Fantasy Worlds, Many Of Them Look And Feel The Same

The isekai genre – with the exception of reverse isekai – is all about being transported into a new, different and fantastical universe. Despite this, many of them end up looking and feeling the same, whether it’s a shot of a hero walking through the streets or a zoomed-out view of the entire setting. For a genre that tends to incorporate many creatively out-there magic systems and character designs, it’s a shame not to see the same level of creativity put into the universes said stories take place in.

5 For Such A Creative Genre, The Main Ways Characters Get Isekai’d Are Boring And Overdone

There is an infinite number of ways that a character could potentially be transported into another world. This is especially true that many systems within isekai don’t exactly have the most concrete explanations, it’s not like the method has to make sense in order for fans to enjoy it.

Despite this, there are two methods that are so overdone within the genre that they’ve become well-known memes at this point. The most well-known one is having the protagonist die by being hit by a truck, but having a NEET character be transported into a video game is one that’s relied on a bit too much as well.

4 Many Of These Universes Are Casually Okay With Slavery

While there are series involving main characters rescuing others from being enslaved after getting transported, it feels incredibly odd that slavery is so prevalent within the genre. Many of these universes possess incredible magic powers that could never be possible in reality, but are also somehow so far behind the times that slavery isn’t questioned for the most part. What’s made worse is that in many of the series where the protagonist isn’t saving those trapped in slavery, they instead disgustingly use said system to their advantage.

Nobility being in power and using said position to act corrupt and line their own pockets, while ignoring the plights of commonfolk, is something that’s rung true in reality that people can relate to. However, with isekai involving faraway fantasy worlds, it begs the question of why this trope has to be used as often as it is.

This is especially true considering that many of these nobles end up feeling the exact same. They have power and use it for corrupt means, have absolutely no character outside of this, and exist only to make the protagonist look even better when he finally brings them down. There’s no real room for any creative growth within the trope.

High school settings are one of the most overused settings in all of anime, mostly because it’s one of the easiest ways to bring tons of different types of characters together. This is especially true within the romance, comedy and slice-of-life genres, and it’s mostly excusable in shows that are based close to reality.

However, it’s inexcusable when it comes to the isekai genre. For a genre that has an infinite amount of mystical settings to work with, it feels incredibly lazy to stick the protagonist into yet another high school.

Isekai – at least, ones that don’t poke fun at the genre itself – are typically power fantasies revolving around a zero-turned-hero protagonist. They form relationships with other characters and tend to help them grow themselves, or rescue them from dangerous situations.

However, it feels as if every single side character who interacts with protagonists within the genre fall victim to this. It becomes incredibly stale when it doesn’t feel like anyone’s able to move past their problems or conquer their goals without the protagonist, especially when said lead typically leads a bland, shut-in life before being transported and doesn’t seem like they’d have the personality to help others in such a way.

NEXT: 10 Unforgettable Anime Genre Deconstructions, From Evangelion To Madoka


Next
One Piece: 10 Characters Who Belong In Other Anime

Hannah has always had a passion for writing, having done creative writing as a personal passion since 2012, and is thrilled to be a content writer for CBR. When she isn’t writing for work or for fun, she can usually be found playing games, cosplaying, singing or petting her cats. You can connect with her here: hostedebt@gmail.com.