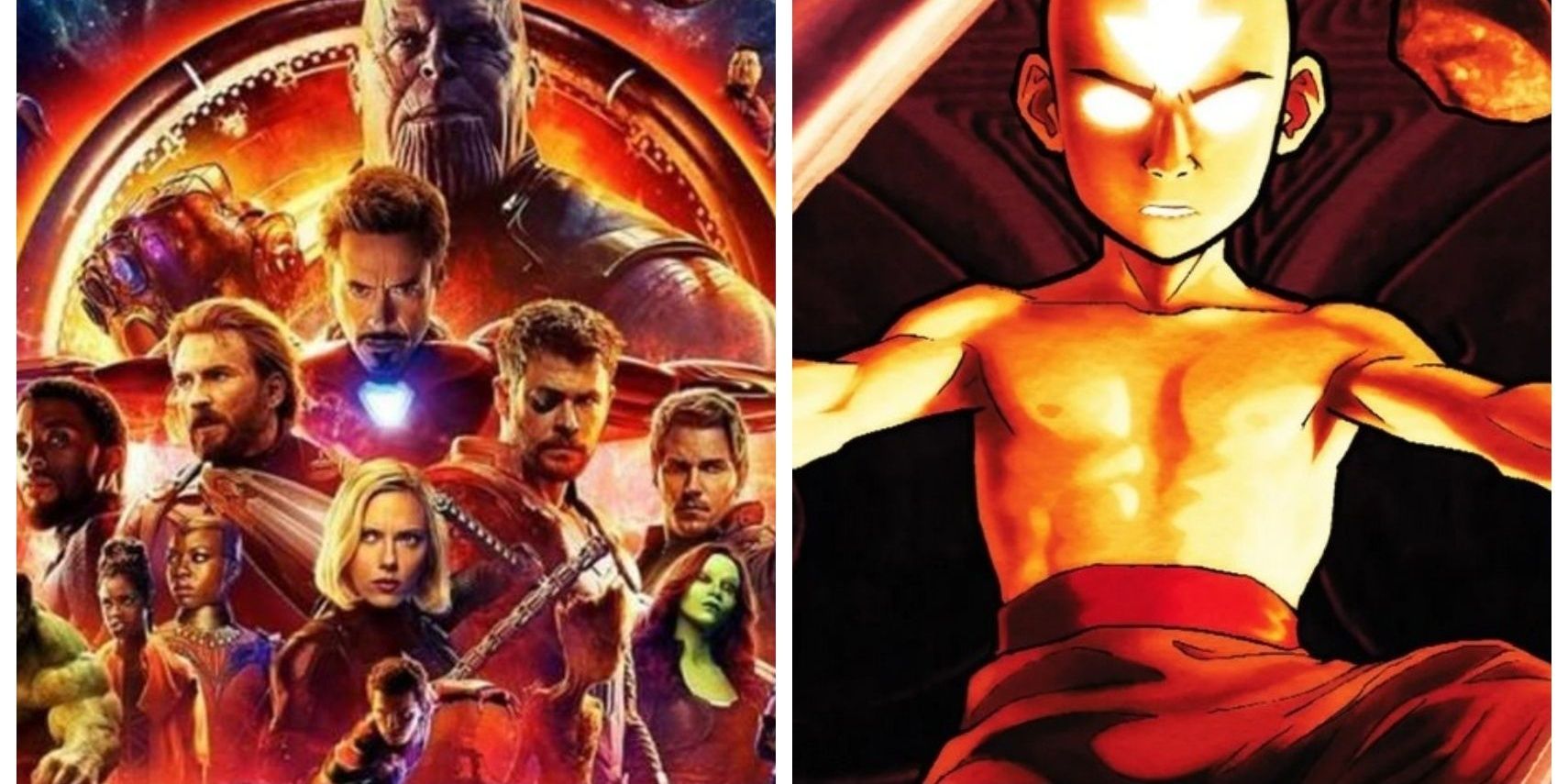 When Netflix added Avatar: The Last Airbender to their series catalog, old fans binge-watched and new fans quickly joined. The exponential increase in fans resulted in Nickelodeon developing Avatar Studios which is expected to churn out quality, canon Avatar content for the foreseeable future.

RELATED: 5 Stories Avatar Studios Can Finish (& 5 New Ones They Can Start)

Another incredibly popular franchise is the MCU which has been ongoing since 2008. Many characters in the MCU have unique fighting styles and techniques that are frequently showcased. Several of these are rather similar to the bending styles of the Avatar world, suggesting that some MCU characters would make excellent benders.

10 Killian & Surtur Have The Fire Power To Be Superb Firebenders

While firebending is a form of element bending rooted in life, many of the users fuel their firebending with rage and hatred for a less pure form of firebending. As Aldrich Killian and Surtur are both villains with less than moral motives, they seem well-suited for watered-down firebending.

Both Killian and Surtur have plenty of experience with fire. Surtur is a Fire Demon from Muspelheim and he is essentially a giant walking flame. Killian’s Extremis formula heats up the body when healing, and he can even breathe fire, much like Iroh, aka The Dragon of the West.

9 Shang-Chi’s Heritage Seems To Have Ties To Airbending

Shang-Chi, a skilled martial artist who now wields the legendary Ten Rings, is the latest addition to the Avengers. Shang-Chi visits the mystical land of Ta Lo where the locals appear to be imbued with mystical powers gifted to them by the Great Protector. This is very similar to how the first people were allowed to borrow the power of bending from the great lion turtles.

The mystic abilities from the Great Protector were visually similar to the techniques seen during airbending fights in ATLA and TLOK. With a knack for martial arts and a strong connection to nature, Shang-Chi would make a spectacular Airbender, and he might look cool with some arrow tattoos.

8 Iron Man Would Be A Surprisingly Spectacular Waterbender

One could argue that Tony should be an Energybender due to his work with arc reactor technology, or even a Firebender or Metalbender because of his firepower and nanotech. However, Tony would make an excellent Waterbender because of his ability to think quickly and adapt to new situations, always learning and adjusting with the ebbs and flows of life.

He also has rather fluid movements, not only as Iron Man but also when he is tinkering away in his lab. Additionally, his battle tactics are similar to Waterbenders’ – often adjusting mid-fight to gain the upper hand – which is expertly showcased during Civil War. Rather than evading, forcing through Steve’s punches, or unloading all of his guns, Tony holds Steve off while F.R.I.D.A.Y. develops counterattack measures to turn the tides in Tony’s favor.

Hulk loves to smash, often altering the local landscape in the process, especially as he gets angrier. Hulk typically uses deliberate movements when fighting which allows him to hit hard but also leaves him vulnerable to attack from worthy opponents such as Thor. He also faces threats head-on, like Surtur on Asgard, which is akin to the mentality of an Earthbender.

Considering Hulk’s size and power, the massive boulders he could hurl at enemies could potentially have entire towns sitting atop them. There is a Worldbreaker Hulk in the comics, so it only makes sense that his MCU counterpart would love to break the Earth apart as well.

6 Norse God Of Thunder, Thor Odinson, Would Be A Master Lightningbender

Given Thor’s control of thunder and lightning, he’s essentially already a Lightningbender as he is able to conjure massive bursts of lightning with ease. By Avatar standards, Thor would be a Firebender as well, but he would likely stick with lightning as it is his godly duty to wield the storm.

During the events of Ragnarok, Thor learned that he didn’t need a conduit for his powers, i.e. Mjolnir, and was capable of channeling the raw elemental power of lightning at will. If Thor had spent the five years after the Snap training instead of drinking and playing video games, he could have become the greatest Lightningbender in history.

5 Dr. Strange Would Excel At Advanced Airbending Techniques Such As Astral/Spiritual Projection

Dr. Strange is a medical doctor first and a mystical doctor second. His frustration over breaking the Hippocratic Oath – despite needing to do so in order to defend his own life – showcases his aversion to violence. Stephen is similar to the Air Nomads who always try to evade and avoid a fight rather than solve their issues with their superior power.

Considering Strange more or less mastered the mystic arts in about a year’s time, he would have no problem ascending to the level of airbending master. He’s already been seen using astral projection which is essentially identical to spiritual projection in Avatar, an incredibly high-level airbending technique.

4 Loki & Wanda Have Showcased Desires To Control People, Making Them Perfect For Bloodbending

While Loki and Wanda have both shown desires to control people, they were for very different reasons and through very different methods. Loki used the scepter to control others, but he also wanted more traditional control in the form of a throne. Wanda only wanted to control her immediate vicinity to cope with some debilitating tragedies, though her means of control were far more sinister.

Either way, bloodbending would have made things a lot easier for both of them. Loki could have bloodbent the people of Earth, and possibly even the Avengers if he could have utilized psychic bloodbending like Yakone or Amon. Bloodbending paired with Wanda’s innate magical potential would be a nasty combination and potentially deadly to both the people of Westview and S.W.O.R.D.

Considering they are made of highly advanced, interstellar metals, it would make sense for Vision and Ultron to be able to metalbend. Ultron was able to craft a vast army of Sub-Ultrons from scraps and Vibranium, and Vision was capable of phase-shifting his body from black hole dense to ethereal.

Metalbending would allow Ultron to expedite the creation of his army, all but disarm Iron Man, and keep Hawkeye’s arrows or Cap’s shield from hitting him. One could argue that metalbending might affect Mjolnir, but it might only be a deflection rather than full manipulation. A Vision that could metalbend would easily be able to dismantle the Ultron army and bring the massive chunk of Sokovia back down to Earth safely, by himself.

Shuri could prove to be a metalbending prodigy given her experience with Vibranium and her mastery over technology. She is the head of Wakanda’s science division and was capable of not only providing Black Panther with an incredible Vibranium suit, but she was also likely behind most of the upgrades in her subterranean laboratory.

With such a deep understanding of an incredibly complex metal that originated from outer space, Shuri would likely have no issues with manipulating run-of-the-mill steel or copper. Mastery over metal would also provide Shuri with a boost in her creative potential. Rather than relying on strong workers and/or machinery, Shuri would be able to put massive amounts of metal in place with ease and precision.

Energybending is a very unique bending ability that only a very select few have ever been capable of in the world of the Avatar. With respect to the MCU, given their origins and skillsets, Ego and Captain Marvel would excel at energybending. The living planet, Ego, was really just the disembodied brain of a Celestial until he crafted a planet around himself using cosmic energy from the universe.

Captain Marvel gained her powerful abilities when she was caught in the explosion of Dr. Lawson’s Light-Speed Engine which was powered by energy from the Tesseract. Not only has she become a powerhouse with seemingly limitless potential, but she also has the ability to absorb other forms of energy like a cosmic battery, nullifying enemy attacks while making herself more powerful in the process.


Next
Attack On Titan: All 9 Titans, Ranked By Design

Julian Prestia is an avid MCU enthusiast, researcher, and overall hardcore fan. He has also been a die-hard fan of Avatar: The Last Airbender since its premiere in 2005.

Julian graduated from the Pennsylvania State University in 2013 with a BS in Wood Products. He continued his education at UNLV where he earned a Graduate Certificate in Solar and Renewable Energy in 2016 as well as an MS in Construction Management in 2018.

Despite his background, Julian is passionate about writing and has been developing music, movies, and various stories for over a decade. When he isn’t watching Penn State football or spending time with his beloved dog, Shabadoo, you can typically find him re-watching an MCU movie/show or doing research on one.

One Piece: Queen’s Brachiosnakeus Is Cursed

Kerr to lead Matildas against Brazil

One Piece: Queen’s Brachiosnakeus Is Cursed